“The Phase IIb trial is just one study, we cannot say it is conclusive. ALLO is a very strong agonist of the GABAA receptor and there is far more to it than PMDD. I don’t think this is the end of the story for Sepranolone.”

Professor Marie Bixo is the author of over 70 peer-reviewed influential papers, many on PMDD and Allopregnanolone. As Professor of Obstetrics and Gynecology at the University of Umeå she has played a leading role in the research and development of GABAA-active compounds. As a senior consultant physician, she has decades of clinical experience and is a trusted public expert on women’s health in Sweden, appearing on national TV and radio channels.

Can you see PMDD symptoms? Professor Marie Bixo and her group are currently using a new fMRI (functional Magnetic Resonance Imaging) paradigm in PMDD research – “We have also been measuring different compositions of subunits in the GABAA receptor in peripheral blood cells to see if we can correlate those to different responses using fMRI of the brain” Bixo says.

PMDD AND fMRI BRAIN SCANNING A 2018 paper (1) found that a group of women with PMDD do react differently to emotional stimuli, in contrast to a control group: “A consistent finding in PMDD patients is increased amygdala reactivity during the luteal phase” says Bixo. “The amygdala processes emotions such as anxiety and aggression. This is interesting because Allopregnanolone (ALLO) is detected at high concentrations within the region into which marked increases in blood flow are measured with fMRI following allopregnanolone administration. The study suggests to us that women with PMDD do not manage to develop a tolerance to ALLO during the luteal phase, whereas other women do.”

AMYGDALA. The amygdala plays a crucial role in processing emotional responses. Inside the amygdala, neurons use the neurotransmitter GABA (gamma-aminobutyric acid) to modulate feelings such as fear, anxiety and agreession. The GABA system is the brain’s primary inhibitory neurotransmitter. 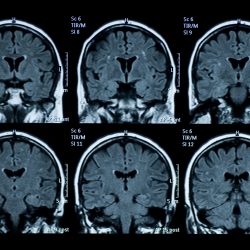 “PMDD and fMRI BRAIN SCANNING: A 2018 paper (1) found that a group of women with PMDD do react differently to emotional stimuli, in contrast to a control group”.

The experimental study is one of many into PMDD, ALLO and Sepranolone carried out by Bixo and the team at the University of Umeå. Together these studies constitute a substantial body of data providing evidence that ALLO is the provoking factor behind the negative mood symptoms in PMDD—and that Sepranolone can ameliorate these symptoms as a result of its ability to antagonize the ALLO effect on the GABAA receptor. Whilst Asarina Pharma’s recent phase IIb results were disappointing for Bixo they do not invalidate the data built up on ALLO: “I believe that Sepranolone works” she says. “First because of the Phase IIa study, which I was involved with and where I saw the active reduction of symptoms first-hand. But also because of the experimental studies we have carried out here in Umeå such as our recent fMRI study. In this we saw the difference between women with PMDD and our control group in their response, and when we challenged them with ALLO, and were then able to extinguish that effect by administering Sepranolone.”

“I believe that Sepranolone works. First because of the Phase IIa study which I was involved with, and where I saw the active reduction of symptoms first-hand. But also because of the experimental studies we have carried out here in Umeå such as our recent fMRI study.”

PLACEBO IN PMDD As an authority on PMDD Professor Bixo has extensive experience of the placebo effect. The top-line results of Asarina Pharma’s Phase IIa double-blind placebo-controlled study which took place in clinics in Sweden, the UK, Germany and Poland, found that whilst the active Sepranolone substance performed on a par with results from its previous Phase IIa study, the placebo effect was 33% higher. A statistically significant difference between placebo and active substance could not be proven.

VARIATIONS IN PATIENT POPULATION “In one way this was expected” says Bixo. “We saw a large placebo effect in the previous phase IIa study too. With PMDD the placebo effect is expected to be high, it’s in the nature of the condition. We are dealing with subjective symptoms. In fact PMDD has a symptomatic, criteria-based diagnosis which is a challenge in itself, because all women don’t have the same symptoms and there is probably a large variation in the patient population, and yet we don’t have any means as yet to differentiate them. With the DSM-5 diagnosis as it is today it is impossible to differentiate subgroups.”

HIGH EXPECTATIONS I Professor Bixo is keen to see the full data from the Phase IIb study to fully explore all the reasons for the placebo effect. She points to high expectations around the study as a potential factor “The main difference between this study and the previous PMDD study was a larger population. Placebo is driven by a feeling of effect or remedy. That means that if you have experience of a drug earlier that helped you a lot, or hear people talking about a drug that has been positive, that expectation of effect can heighten placebo. And expectations were really high around this study.”

“I expect we will see a lower placebo effect in the Menstrual Migraine study. With migraine you measure the number of attacks. And an attack is an attack. There is no judgment involved, it is very clear-cut to define.”

DIAGNOSIS AND RECOGNITION Bixo also points out that many participants in the study may have received both their first PMDD diagnosis and treatment as part of the trial: “My experience with this group of patients is that they have usually had severe symptoms and serious problems for many, many years, and they’ve never connected it to the menstrual cycle. Usually they have felt misunderstood by everybody, including doctors, who often don’t even believe in PMDD and think these are “normal” PMS symptoms they should put up with. So once they get a diagnosis it is often a real revelation with great emotional impact. I would expect getting a diagnosis as part of the study could provoke a strong response in the central nervous system.”

Injection too, Bixo says, is established as a high-placebo modality. “We know that injection can drive the placebo effect. Our brain tells us that the medicine is more effective because we’re injecting it.”

SUBGROUP PRESENCE IN PATIENT POPULATION Bixo identifies possible subgroups as an important area to investigate in the full data from the study: “It will be interesting to find out if there is a subgroup of particularly strong responders” she says. “It would be easier to confirm the placebo if the subjects were more similar to each other and we found confirmed groups. I’ll also be interested to see how responses were distributed across different countries.”

PMDD REMAINS A NEUROENDOCRINOLOGICAL CONDITION “I think the data on GABAA receptor neurosteroids, and in particular ALLO, plus the recent WHO IDM-11 diagnosis all underline that PMDD is a neuroendocrinological, not psychiatric condition or mental illness. No matter how influential placebo is, PMDD symptoms are severe, cyclical and only affect a small proportion of PMS sufferers. It is absurd to think you could have a psychiatric disease that only manifested symptoms for the same two weeks every month. We’ve proved so many times that in the two weeks following menstruation women with PMDD are symptom-free and fine. We should absolutely not lose sight of the cyclical facts.” REDUCED PLACEBO EFFECT IN MENSTRUAL MIGRAINE Bixo believes that a positive result for Sepranolone in the present menstrual migraine study would play an important part in renewing and strengthening research into neuroendocrinology, ALLO and its sibling compound Sepranolone: “I expect we will see a lower placebo effect in the Menstrual Migraine study. With migraine you measure the number of attacks. And an attack is an attack. It is a clear, set period. There is no judgment involved, it is very clear-cut to define. I think that will make the effect easier to distinguish. I believe that Sepranolone’s safety profile—and I’m totally convinced it is safe and has no side effects—combined with the phase IIa results, the unmet need and the wealth of supporting data, means that Sepranolone will always attract interest from clinicians and patients whatever indication it is launched for.”

HIGH GABAA COMPOUND POTENTIAL Professor Bixo points out that these remain early days for GABAA-active compounds, yet the potential is real: “ALLO is a very strong agonist of the GABAA receptor and there is far more to it than PMDD. I don’t think this is the end of the story for Sepranolone. This is ultimately just one study. I realize that these results are disappointing, but the science around ALLO and the unmet need for a PMDD treatment for me make it unlikely that this will go away. Plus, remember, this whole area of GABA-active steroids is really new. It wasn’t even there 20 years ago. Nobody knew about Allopregnanolone and its effect on GABAA receptor mediated actions in the brain, so a lot has happened. And today there are several different research groups working with these kinds of substances, so I’m hopeful more research will keep being carried out.”

1. Effects of GABA active steroids in the female brain with a focus on the premenstrual dysphoric disorder (Bixo et al. 2018) 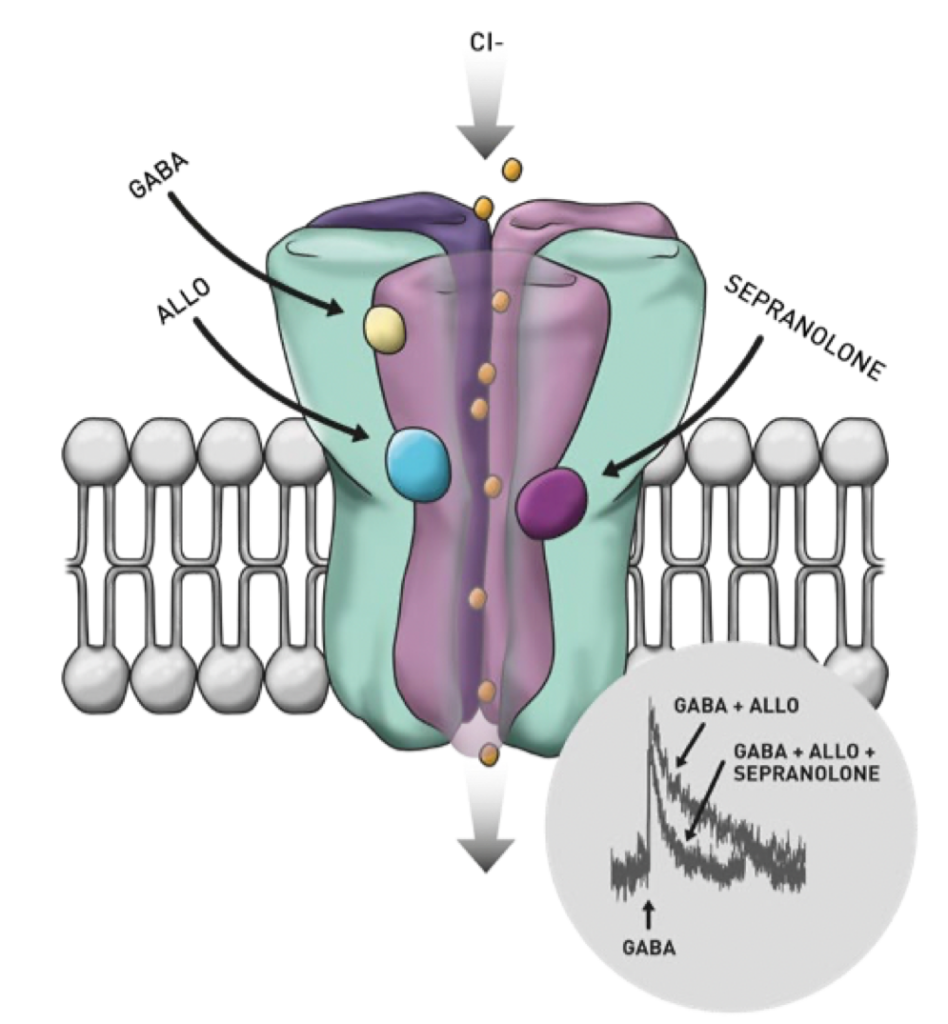